For spring break, my little crew took the most epic Northern California roadtrip. We started in Portland, Oregon and made our way to San Francisco, California. Lots of friends have asked me for details on this trip, so enjoy and please repeat!

Also, if you are interested in taking up hiking, check out The Ultimate Beginner’s Guide to Hiking by Jenny Brown. It’s a great comprehensive guide, perfect for getting you started. And for tips on roadtripping in my home state of Colorado, check out https://www.your-rv-lifestyle.com/things-to-do-in-colorado/.

We flew from Denver and arrived in Portland at about 9:30am, leaving us plenty of time to visit Multnomah Falls, which is the tallest waterfall in the state of Oregon, at over 600 feet. I have to admit we got a little lost on the way, and fortunately happened upon the prettiest road I’ve ever seen, and another epic waterfall in Guy W. Talbot State Park. These two falls topped most of those we’ve seen in Colorado, aside from Hanging Lake, my favorite. 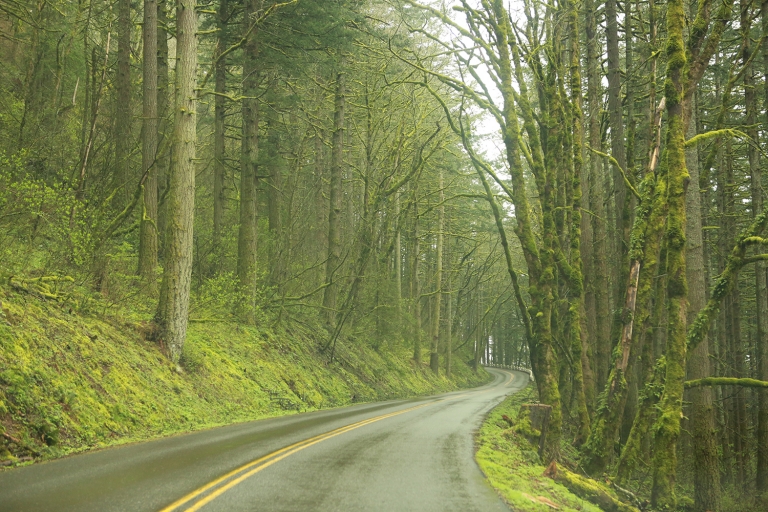 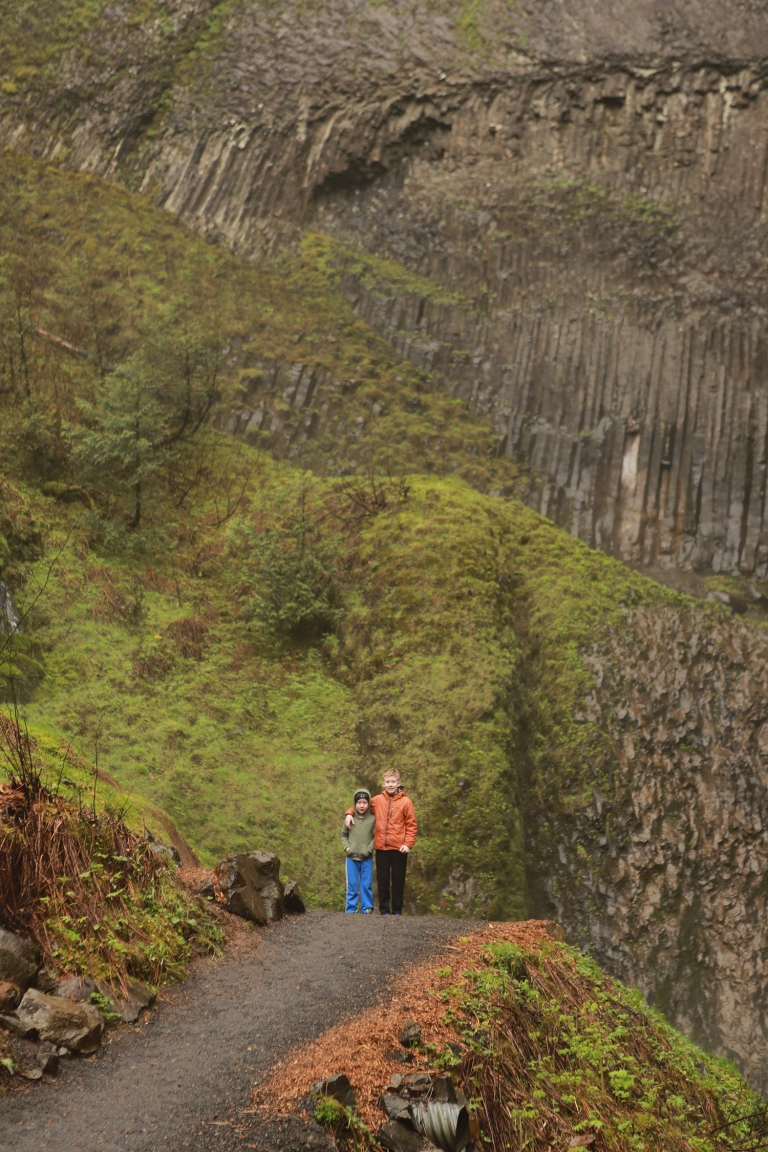 In the state park, we stumbled upon this incredible greenery. So. Much. Moss! 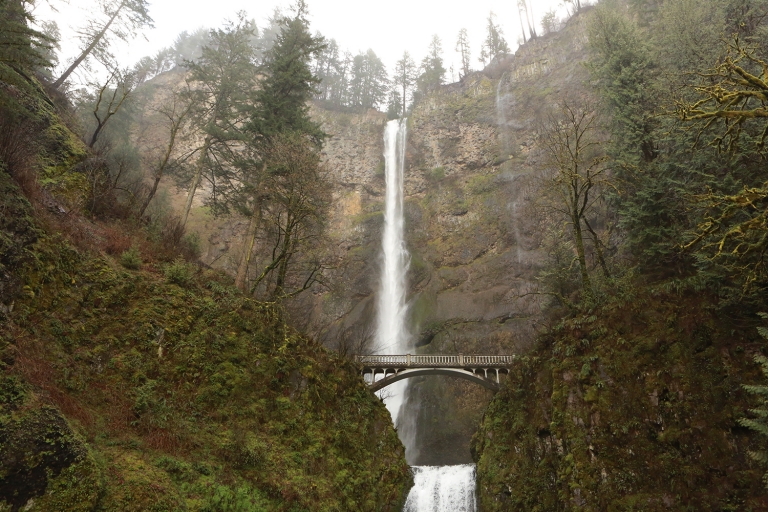 We stayed at Embassy Suites, Downtown Portland. It’s a lovely historic hotel, built in 1912, which happens to be around the corner from the original Voodoo Doughnuts, which we learned is open 24 hours a day. We had dinner at the Original Dinerant (think part diner/part restaurant, aka hot dogs and milkshakes for kids, wine and salad for me). We swam in the hotel pool and crashed hard that night.

Destination #2: Out N’ About Treehouse Treesort

My youngest is obsessed with treehouses. He draws them, writes about them, dreams about them. He even wrote a letter to Pete Nelson, Treehouse Master, to which Pete promptly replied, which was awesome.

So, when we planned to spend two nights sleeping in a treehouse, we kept it a secret. The big reveal was pretty epic, he was blown away by the sight of so many treehouses and the thought of actually sleeping in one. 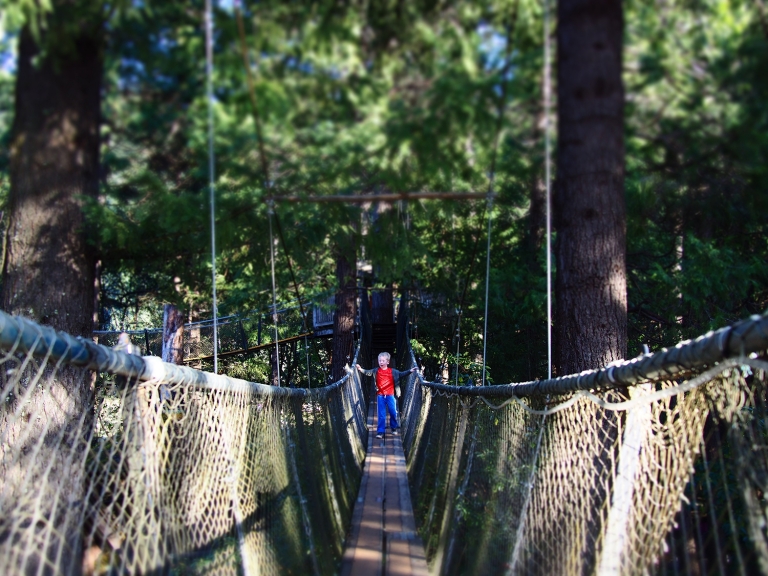 There are over a dozen treehouses at the Treesort, many of which are connected by swinging bridges. 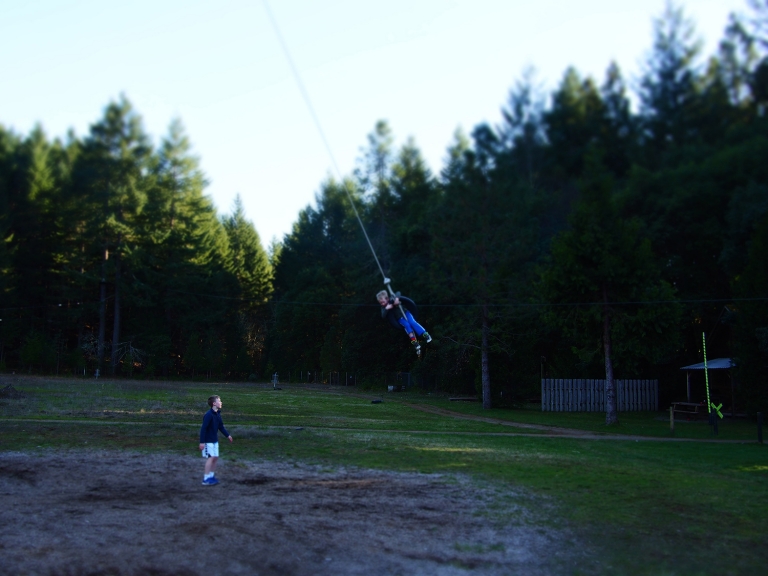 There’s tons of stuff to do, like play on this rad tire swing. We also zip-lined and rode horses right on the property. 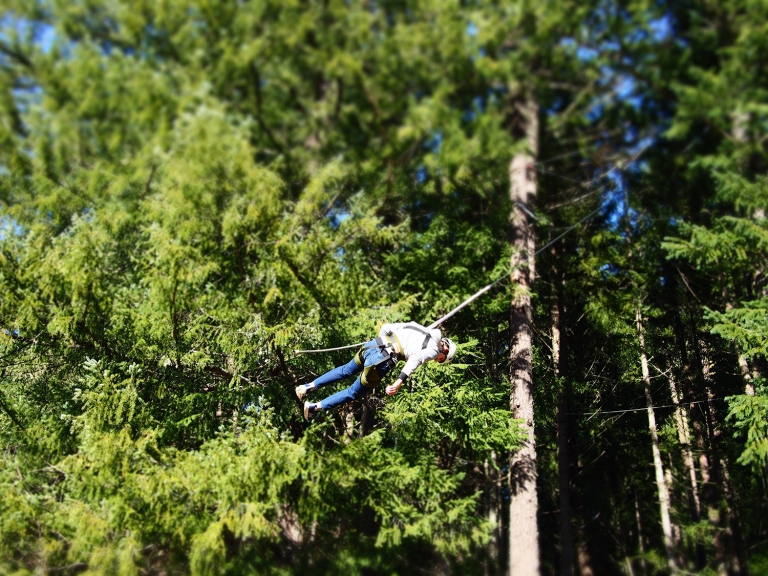 This is the Tarzan Swing. It’s INSANE. I did not do this, needless to say.

From the Treesort, we took a day trip to Stout Grove, a stunning Redwood Grove in Jedediah State Park. The drive was only about 45 minutes to this quiet yet jaw-dropping forest. America is freakin’ amazing, people! 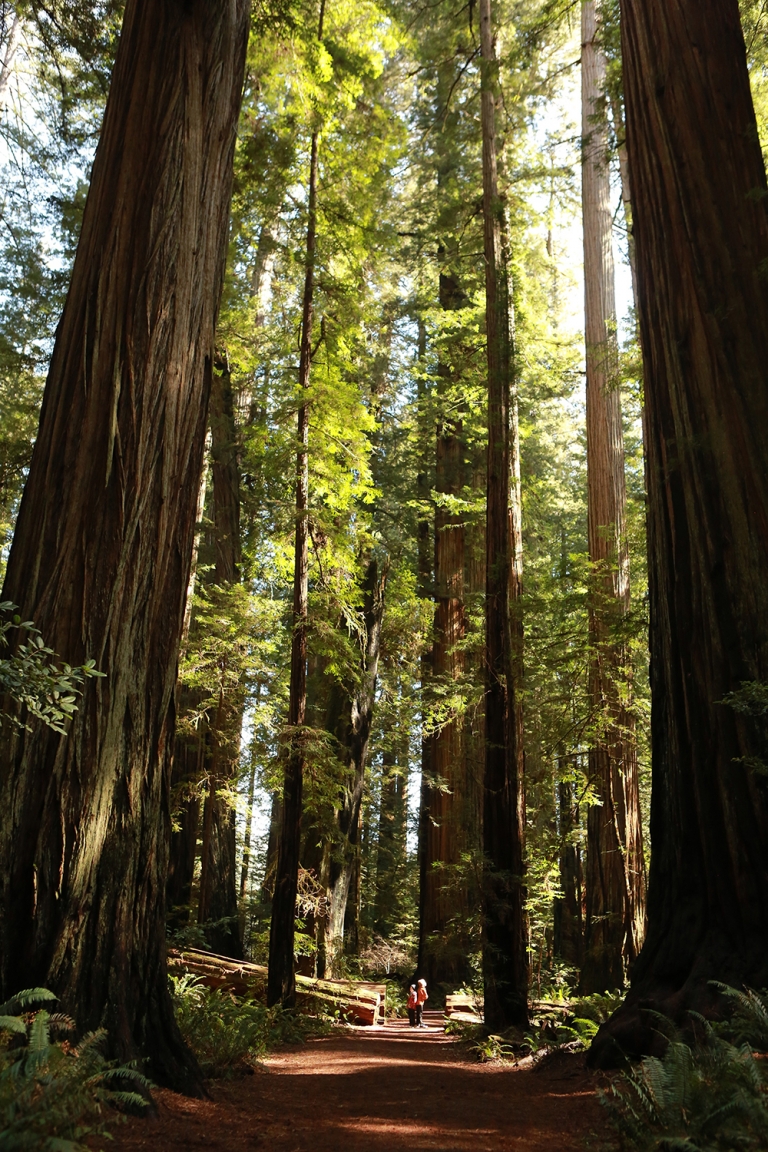 Those are my little tiny boys in the big, big forest! The way the light filtered through these giant trees was surreal.

Our next drive was a long one, along a windy road that serpentined over mountains and through many more redwood groves. Once we reached the ocean, we stopped to dip our toes in the sand and hang out with the wildlife. 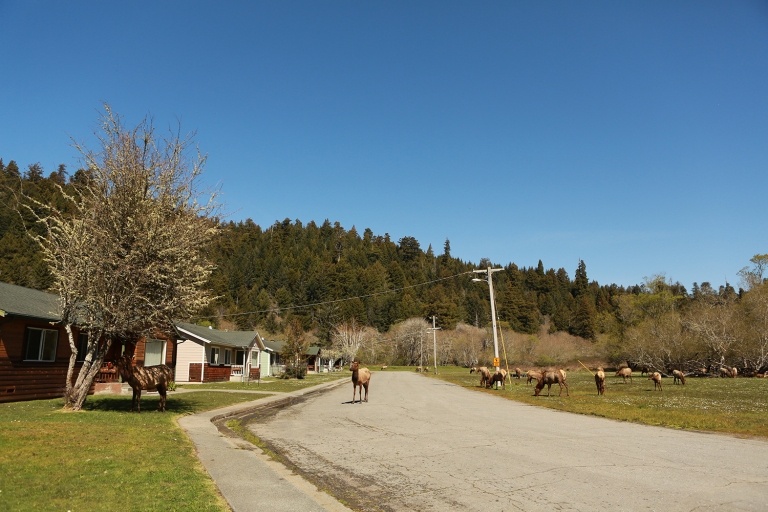 We added the Elk Meadow Cabins (aptly named) to our destination list for next time! Apparently the elk pass through here frequently, and we were fortunate enough to see them. 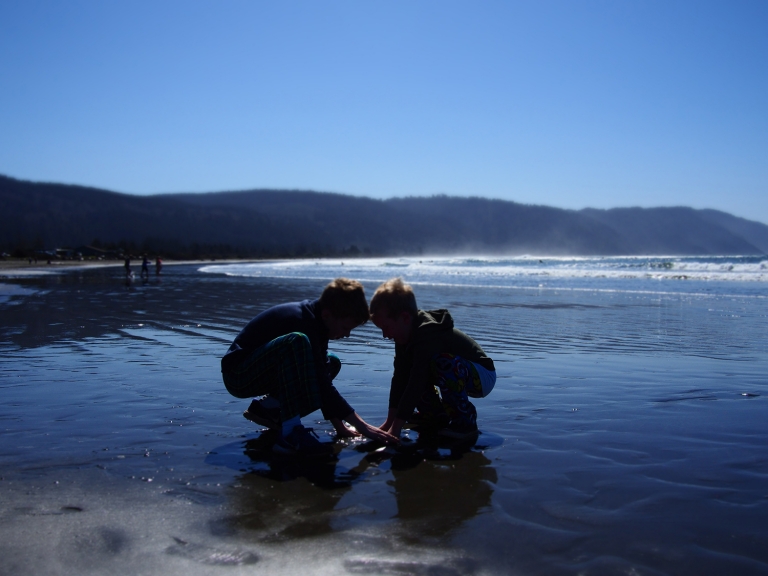 We had to hop out of the car at Crescent City, the first spot where we saw the ocean. Totally worth it. 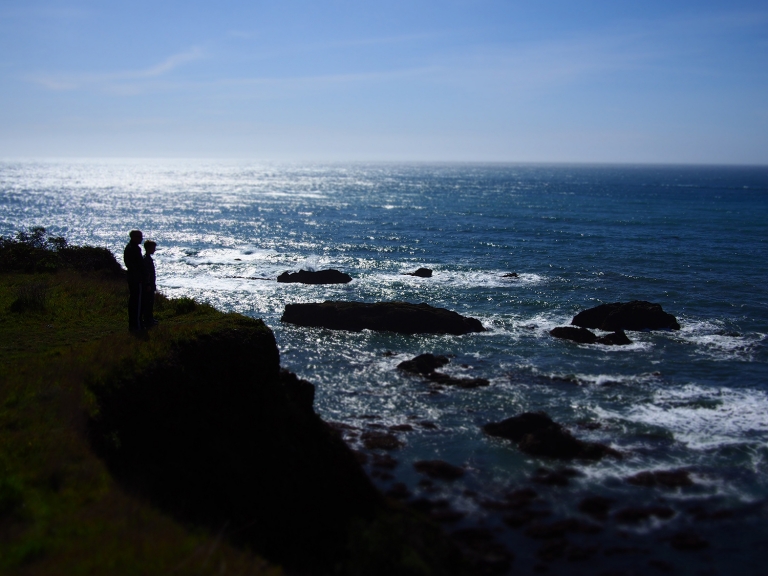 One of our many stops along the rugged Northern California Coastline.

It was worth the nauseating drive because about 10 minutes before our arrival at the hotel, we stopped in Ft. Bragg at Glass Beach. Sea glass is everywhere, along with snails and hermit crabs. There are so many tidal pools to investigate, we literally could have spent hours here. 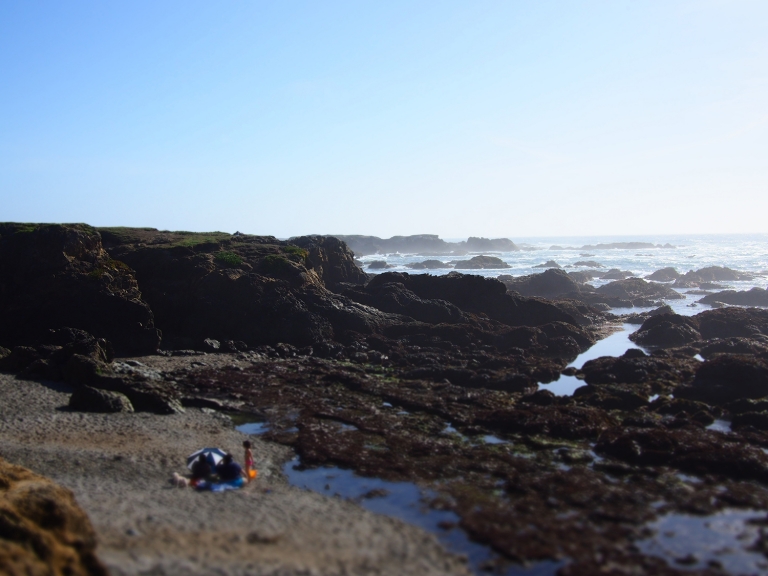 Glass Beach. Years ago, there was a dump nearby, from which all of the garbage bits degraded into beautiful pieces of sea glass … a happy ending to a not-so-awesome story. A private owner worked with the state of California to clean up the site, and now it’s a state park where treasures abound. 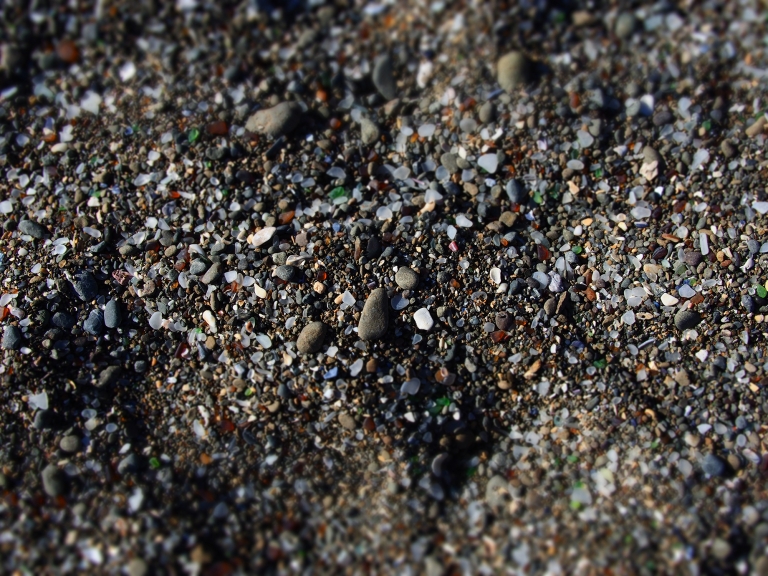 And then we were greeted at the cozy Sea Rock Inn, pictured below. We all desperately needed showers and comfy beds, and this was the place to be. 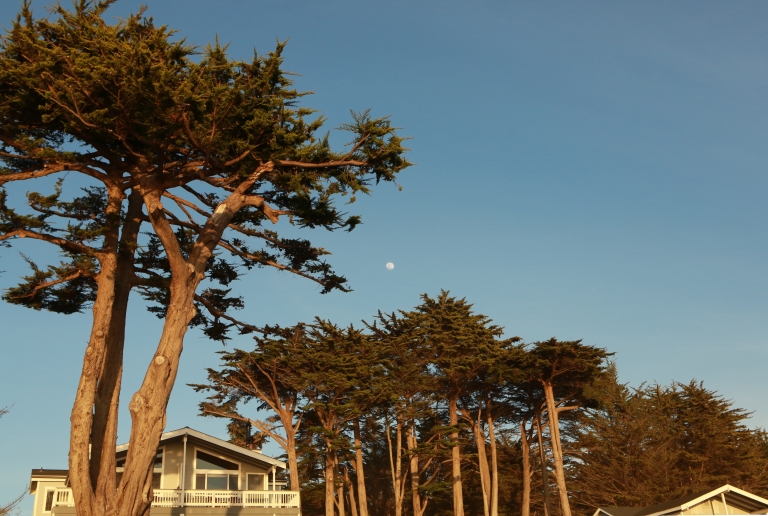 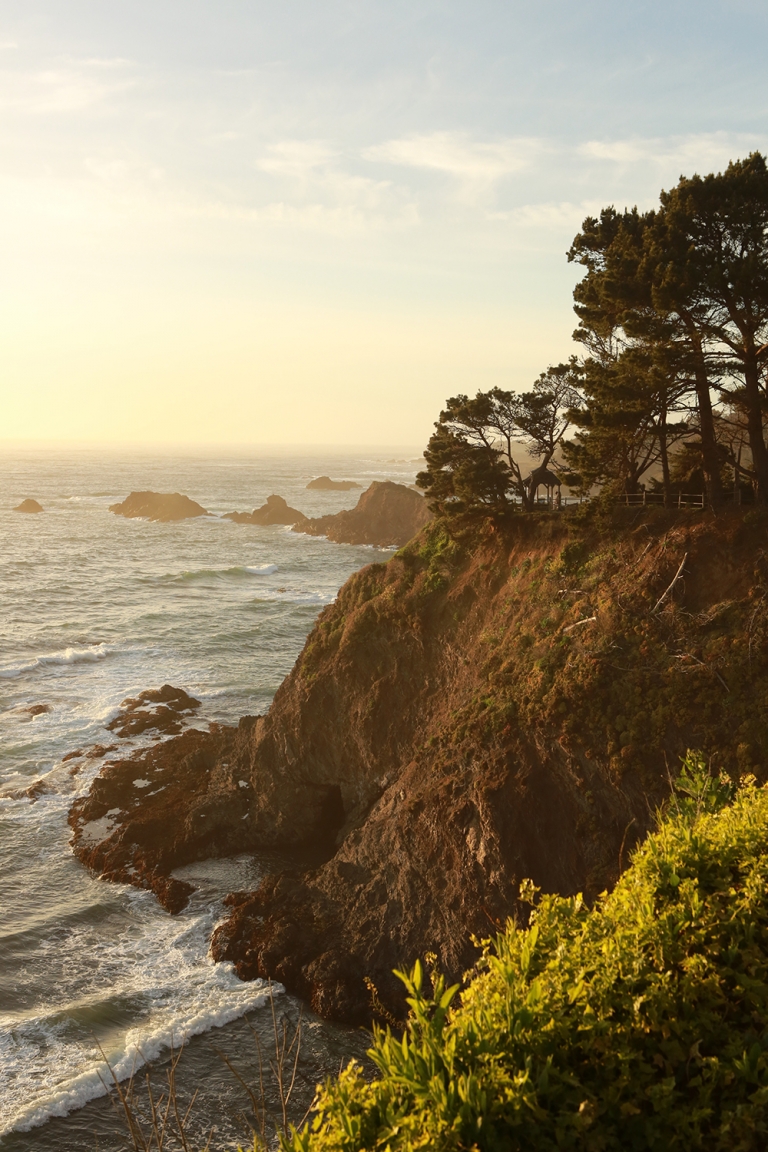 The view from Sea Rock Inn .. could it be any more gorgeous?

We had a lovely dinner at Luna Trattoria, a very traditional Italian restaurant. Since they don’t have a kids menu, my little one was forced to order from the grown-up menu, and learned that he loves antipasti.

The next morning we walked along the bluffs, where we saw sea lions were playing in the water. Amazing. 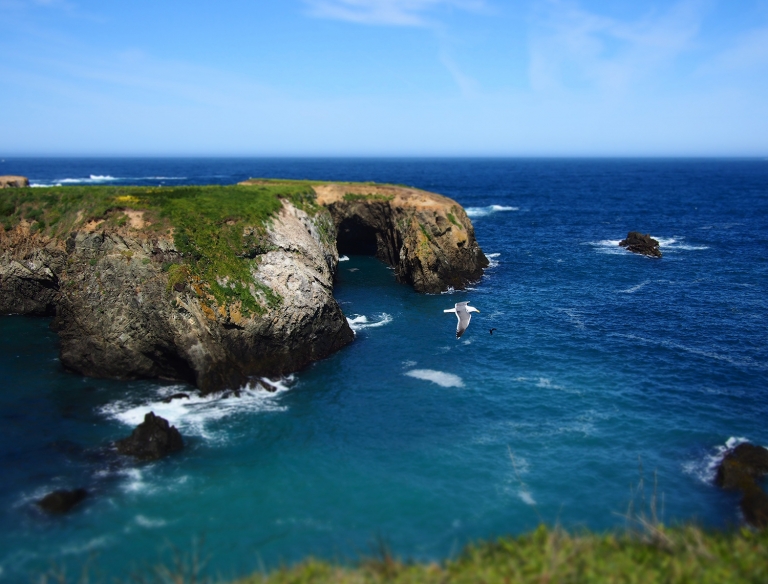 We drove through wine country to arrive in San Francisco just in time for rush hour, but it didn’t stop us. We stayed at Pier 2620, which was only a few blocks from Fisherman’s Wharf, and right in the midst of SF hustle and bustle. We visited the Sea Lions on Pier 39, ate dinner at Boudin Bakery and watched street performers including the amazing Shocka SK, who my kids just loved. In other words, we did all the touristy things one should do with only a single night in San Francisco!

We wrapped up our epic roadtrip with a swing through LA to see family. There we found went boating, watched my niece wakeboard and once again, hung with the sea lions. It was a great end to an amazing trip. 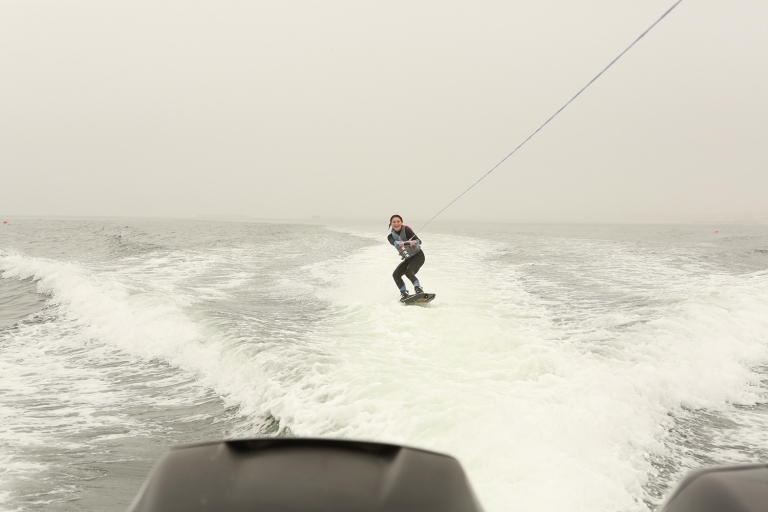 That’s my niece, wakeboarding in the freezing cold Pacific Ocean. Always with a smile on her face! 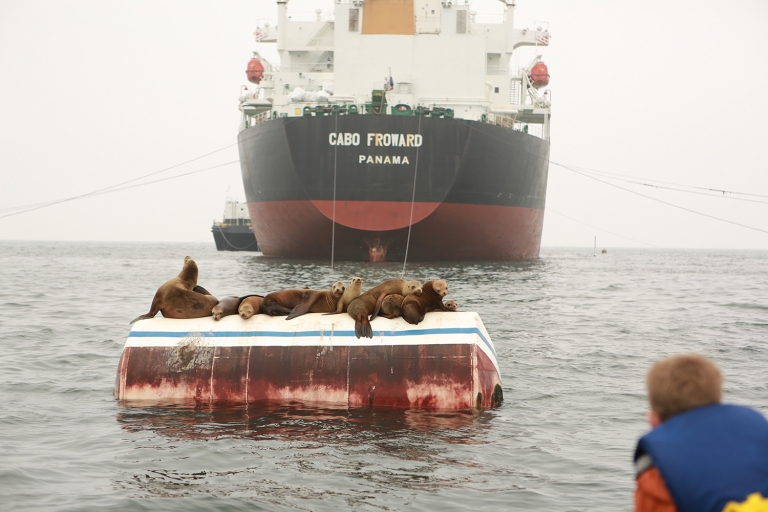 We got up close and personal with this sea lion family. And on that note, we hope you have the chance to take this roadtrip. It’s a lot of drive time, but worth it!